One Whale of a Ship: The world's largest cruise ship, The Oasis of the Seas, splashes the competition and wows passengers

‘Mammoth,’ ‘massive’ and ‘colossal’ are just three of the adjectives I’ve heard passengers use to describe the Oasis of the Seas. For me, the world is gi-normous. I know, that’s not a word, but words really don’t do this ship justice. You have to experience it. The Oasis of the Seas, the newest in Royal Caribbean’s fleet, and the world’s largest cruise ship, took its maiden voyage from Port Everglades in early December. But before the paying public got to board, travel agents, cruise industry insiders, executives and journalists like me got to take a brief 36-hour tour at sea.

If you haven’t already heard, the Oasis spans 1,187 feet, weighs more than 225 tons and can hold 6,296 guests. It boasts 17 decks, seven distinct neighborhoods including a Boardwalk (complete with Carousel) and Central Park – the first-ever park at sea. There are other firsts onboard as well: The first zip-line and moving bar at sea, and the first full Broadway show performed on any cruise ship. 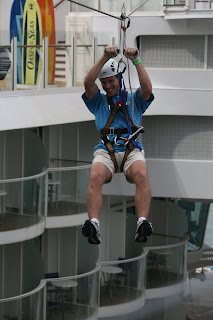 Adventurous cruisers can enjoy the Oasis of the Seas' zip line.
(all photos courtesy of Royal Caribbean)
For all the hype this ship has received, The Oasis delivers. Adults can sunbathe in the tranquil Solarium for some rest, relaxation and a restaurant offering healthy choices. In addition to the three-floor Opus Dining Room, passengers can also enjoy specialty restaurants, for a small surcharge. The most exclusive dining venue on the ship, 150 Central Park, features dishes by 23-year-old chef Kerriann Von Raesfeld; a sushi bar, steak house and Italian restaurant, to name a few. 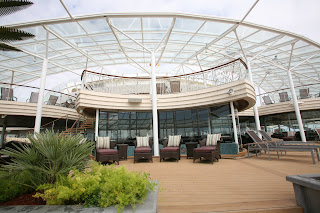 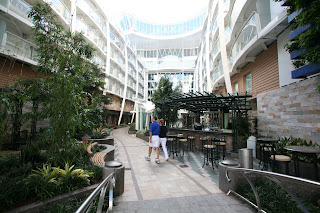 The first park at sea, Central Park also houses specialty restaurants on the ship.
For the adventurous, there’s the aforementioned zip line, a rock climbing wall and two Flo-riders for surfing and boogie boarding. Guests can also enjoy nearly two dozen pools and hot tubs. For entertainment, there’s a fantastic ice skating show and the Aqua Theater performances feature high divers and synchronized swimmers. In short, you really have to work hard to be bored on this ship. Passengers who sail on The Oasis’ seven-day itineraries to the Caribbean will have plenty of time to try to do and see it all.

Accommodations onboard The Oasis include ocean view staterooms, plus unique interior cabins with balconies overlooking Central Park or The Boardwalk. Luxury cabins are also available, including two-story lofts, and suites that can very comfortably sleep 10 and feature an enormous deck for private entertaining.

A Class of its Own

Ships the can carry up to 5,000 passengers are described as ‘mega ships.’ With the ability to carry more than 6,000 cruisers, plus nearly 2,000 crew, The Oasis of the Seas is really in a class of its own. At least three other cruise ships – Norwegian’s Epic and Disney’s Dream and Fantasy are preparing to launch later this year and in 2011. They’ll still dwarf in size compared to The Oasis. Norwegian is hoping to lure passengers with private access stateroom and villa complexes, an Aqua Park and bowling alley. Disney will boast the first water coaster at sea.

So is bigger really better? And why the need for such elaborate amenities? Naples travel agent owner Gala Reitz says it’s all about competition.

“Cruise ships have to compete with the land resorts, where you get food and drinks just like you do on ship, but also water sports and entertainment,” says Reitz. “Cruise ships relied on passengers going port to port for entertainment. The Oasis and the others following are having all these activities that one would expect to see at a land resort.”

Royal Caribbean president and CEO, Adam Goldstein agrees, adding that by offering passengers more choices and variety they can tap into the ever-increasing multi-generational travel market. “The major element that we’re able to have (with The Oasis) is a ship that is extremely pleasing to the grandparents, the parents and children of all ages,” Goldstein says. “That’s a huge benefit to us.”

“We’re not after a number of tons. We’re after a level of satisfaction that is extremely competitive with land vacations.”

Travel agent and blogger Amber Blecker believes The Oasis will attract passengers who normally wouldn’t travel on Royal Caribbean, or who wouldn’t consider a vacation cruise.

“They hit a homerun with this ship,” she says excitedly.

With its size, amenities and comfort level, Royal Caribbean did more than just hit a home run with The Oasis of the Seas –they hit it out of the ballpark.
Posted by candacewrites at 12:14 PM